Qualifying to represent the Island at a games can be a very special moment in a sporting career. Doing it twice is a brilliant achievement. But doing it for the second time 28 years after the first and in a completely different sport may just be unique!

Dawn Hodge was born on the Isle of Wight and attended Bembridge Primary School, Forelands Middle and Sandown High School. She was sporty from an early age and was a member of the Vectis swimming club, Ryde Harriers and Shanklin and Sandown Rowing Club. She represented the Island in both hockey and netball as well as athletics.

In 1989, at the age of 17 Dawn Hodge was selected to represent the Isle of Wight in Athletics at the Island Games staged on the Faroe Islands. She was a finalist in the 100m and 200m and returned home with a gold medal as part of the 4 x 400m relay team and a silver medal for the 4 x 100m. 28 years will have elapsed by the time the games are staged in Gotland next year, where Dawn will take her place as part of the Isle of Wight ladies golf team.
After leaving the Island to study for a degree in Sports Science at Leeds University she also moved away from competing in athletics. Whilst at University she was selected to play for England students at rugby, and went on to represent the South of England, and was selected for the Super 4’s –  the top 60 women rugby players in the country. Her sports science degree saw her take on the role of National Women’s Development Officer for English Basketball, National Development Officer for Sport England for their Governing Body Services Team, and then Major Events Consultant at UK Sport whilst continuing a playing ‘career’ at Blackheath Women’s Rugby Club for 6 years.
Dawn returned to the Island in the autumn of 2010. Having previously experienced golf through informal play with friends, she decided to pursue her interest in the sport further by joining Ryde Golf Club. Having reduced her handicap to 16 the end of 2012, she moved to Shanklin and Sandown Golf Club.
In 2015, She qualified for the England Golf Regional Medal Final held at Royal Blackheath Golf Club. There she posted a score of one under her handicap, beating a field of 120 golfers to become the South Regional Champion and qualify for the National Grand Medal final held at Frilford Heath where she finished 7th again one under her handicap. This competition saw her handicap cut to single figures for the first time.
2016 has been another successful season for Dawn, culminating in her posting the lowest score in a ladies’ qualifying competition for the course at Shanklin and Sandown Golf Club, with a gross 71, one under course par. This saw her handicap cut to 5.
When she is not playing golf, she is busy running Lockslane Bistro in Bembridge.
When asked about her selection for the Island Games she said ‘I was really excited and honoured to be selected for the ladies’ golf team, it’s great to be able to compete both as an individual but also you know you are playing for the rest of the ladies team. As somebody who has always played team sports this is important to me and an opportunity I will relish. I know that the standard of golf will be exceptionally high at the games, but what a fantastic opportunity and experience – I really can’t wait’.
It would be a magnificent achievement if Dawn could add to her medals from the 1989 games! 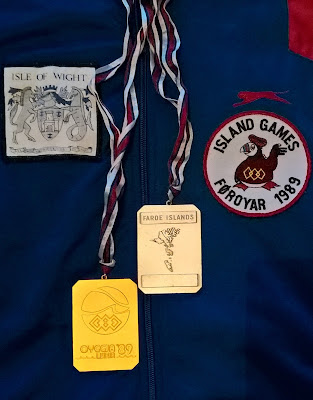