Sadly a few weeks ago the Isle of Wight lost a person who gave so much of his life to Island Sport.

Terry was a key figure in the Isle of Wight Island Games Association and Island Golf. His main sporting passion was golf, he was a member of Freshwater Bay Golf Club since he joined as a junior following in his dad’s footsteps. In 1992 Terry was made captain of the club and become a secretary in 2000. Since joining the club, Terry held virtually every position in the club, no mean feat for one man.

In more recent years he helped with the Ise of Wight Golf Juniors, he would often be seen out on the course working with the youngsters, helping them develop their golfing skills.

Terry qualified as a golf referee, attending and adjudicating at many tournaments throughout the country. He had recently become responsible for appointing referees to competitions across the local region.

Terry was the Secretary of the Isle of Wight Island Games Association. His work with the association has ensured that hundreds of athletes have been able to attend and compete and latterly he led the work required for the association to become a registered charity.

His work with the Island Games didn’t stop at a local level, he was a part of the International Island Games Technical Committee for golf. This committee is responsible for reviewing the competition rules and then managing the golf tournaments before during and after each game. Terry had been appointed as Chair of the Technical Committee for the Guernsey Games next July.

Kev Winchcombe, the current Chair of the Island Games Association, described Terry as his right-hand man, he had the skills to keep on top of everything with a calming influence. He will be sadly missed by all associated with Team IOW both locally and internationally.

Terry also worked for organisations outside of sport, including Chale recreation ground committee, Chale scouts, the MS Society, Chale School and the National Coastwatch Institution, working at the Needles Battery.

It would be fair to say that he was an incredible administrator whose skills and dedication will be greatly missed by all the organisations he was involved with.

Our thoughts are with his wife Elizabeth, his children Nathaniel and Rosanna, their partners Katie and George and his grandson Jack. 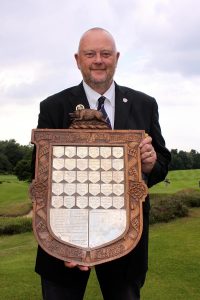